Yes, you read that properly, Vegan Queso but loaded with vegan chorizo on top. Now, I know what you’re thinking. Phillip, how did you find vegan chorizo? Well, we didn’t. We took Impossible Meat and used chorizo spices to make the chorizo for our Loaded Vegan Queso. Just don’t argue with it and try it. Recipe is at the bottom of the page!

Val and I aren’t vegan or vegetarian, but we always want to try out new and healthy things. This was one of those ideas we decided to try after watching Viv’s Tips on Food network. The flavor that came out was something that EVERYONE would love. This Loaded Vegan Queso is the perfect snack or appetizer for any person (except if you have nut allergies).

As mentioned above, we saw a video on Food Network called Viv’s Tips where she makes some amazing food and gives tips along the way. One of those tips was for 4 different kinds of queso. And surprisingly to us, the one that came out the best was their veganone of which was vegan. After some experimenting and trying different things out, we knew we had to add in Impossible Meat to the mix.

After finding the perfect flavor combination, we knew we had to pick a tequila to give it that extra flavor. When picking Tequilas its very hard to choose which one to buy. All tequilas are made from agave but there are different types. Reposado tequila has a golden hue and it gets that from the barrel in which it ages. Silver tequila or blanco is destilled in stainless steel containers and is clear. You’ve got a tequila in a skull bottle, another that comes with worms in them. George Clooney has a tequila called Casamigos. But, we thought long and hard and knew who to turn to. Almost as if he was calling to us.

One of our inspirations, both health and lifestyle is the man, the myth, the legend, the Rock! Dwayne “The Rock” Johnson keeps us motivated and honestly, if you like food and don’t follow his Instagram @therock you’re missing out on some AMAZING cheat meals. Once a week he does cheat meals (normally Sunday) and they range anywhere from delicious pastas, massive burgers, enormous chocolate chip cookies and even something called the Rock French Toast. In order to pay homage to him, we decided to make our Loaded Vegan Queso with his new tequila, Teremana. We also apply the tequila directly into our mouths because it is that delicious!

Food Processor or Blender: After the cashews are soaked up and soft you will need to blend them up and make smooth. We prefer a food processor but a blender also works.

Skillet: Using a small skillet or dutch oven you will cook the impossible meat, simmer the cashews in Teremana Tequila and then thicken up you Loaded Vegan Queso to perfection.

Strainer: A mesh strainer or sifter is the best to use when you are smushing the diced tomatoes to get the juice.

Chips: We love a good tortilla chip, so get your favorite and dig into this Loaded Vegan Queso!

An Appetite: Get ready to dig in, cheat day or not. You won’t be able to help yourself!

Teremana Tequila – or your favorite blanco tequila to add to the cashews to absorb.

Impossible Meat – this will serve as our “chorizo”, or you can use actual chorizo if going non-vegan.

Lots of spices – we know, we know, you’re basically going to the grocery store and asking for ALL the spices. But they’re all important and help to make the delicious flavor in our Loaded Vegan Queso. To make your list easier at the store, you’ll need cumin, oregano, coriander, paprika, ancho chili powder, garlic powder, cinnamon, turmeric, ground cloves, onion powder, cayenne.

To make this Loaded Vegan Queso go ahead and make the vegan chorizo. Cooking impossible meat is just like cooking regular ground beef but you will want to add a little extra oil to the pan since it doesn’t provide any grease when cooking. You want to make sure to get the internal meat temperature up to 165 degrees. After the temperature is just right, add in all of the vegan chorizo spices and the water/apple cider vinegar. Let simmer down for a bit and set aside for later.

In the same skillet or dutch oven, strain the diced tomatoes to get the juice from the can. Add the juice to the skillet with 1 cup of cashews, vegan queso spices, and Teremana Tequila. You’ll let that cook for about 10-15 minutes until the cashews are soft and almost breaking apart. We recommend inserting tequila directly into mouth while waiting, you know, to pass the time!

After the cashews are soft, take everything in the pan and add to the food processor or blender. Pour in the yeast, roasted red peppers, white vinegar, hot sauce, and water as well. Blend the cashew mixture until smooth and then add back to the skillet. Turn the heat to medium/low, bring the Loaded Vegan Queso back to heat and let thicken. Once thicken and most of the liquid is absorbed, remove from heat. Top with vegan chorizo, jalapenos, and cilantro on top. Grab extra tequila and make a margarita. Grab the chips, Loaded Vegan Queso and devour while sipping margaritas.

We also find it helps if you have a space heater to grab, a bathing suit, a lawn chair and play beach sounds in the background. This will give you the true mindset of being on the beach in the summer while drinking margaritas and eating Loaded Vegan Queso. 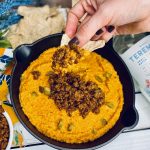 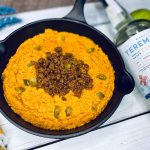 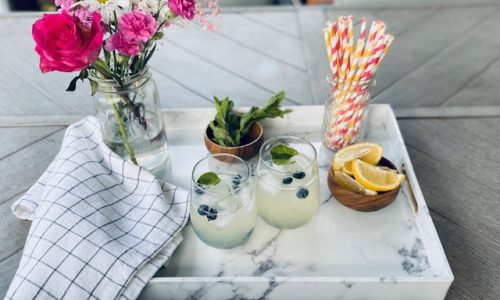 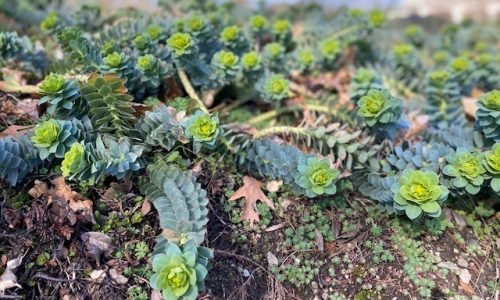 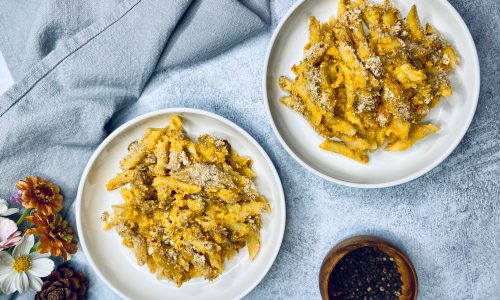